One of my greatest challenges was transitioning two Alpine does from a conventional diet to non GMO feed for dairy goats. When the does were purchased, one was in milk & the other was pregnant (unbeknownst to us). Not wishing to stress them more than necessary, their diet of alfalfa, dairy grain & hay was continued.
A little fodder was added to their food almost immediately. Once they stopped flinging the sprouts around and actually tasted them, the does were hooked. As the rye/sunflower seed fodder was increased the grain was decreased. Soon, five pounds of fodder replaced their grain at the morning milking. They each consume their five pound ration and are still trying to lick up every single sprout when I drag them from the stand.
The does were transitioned from dairy pellets to a homemade blend of oats, wheat bran, black oil sunflower seeds and flax seeds. Loose minerals are offered free choice & they get an herbal wormer preventative.

Avoiding alfalfa, now a modified crop, proved to be the most troublesome. Years ago, my constant quest was to find a stable source of good quality alfalfa hay to feed my dairy goats. Now, I no longer wanted alfalfa and the hay could be lesser quality because of the amount of fodder the animals consume. Good fortune was with me the day my daughter found an ad for orchard grass hay grown by an alpaca breeder. No alfalfa, not stemmy, delivered and stacked in the barn…truly a dream come true.
Alfalfa contains a lot of calcium which lactating animals need. Finding a substitute was stretching my brain. The problem was solved after searching various goat forums. A tablespoon of calcium carbonate is added to each doe’s fodder which eliminates the need for alfalfa pellets.
Rose Merry, the doe in milk, didn’t drop production during this transition. Even if she had, I would have been satisfied since her overall condition improved. She was quite thin when she arrived and later became alarmingly so. The further weight loss was due to the stress of the move; it took her a good while to settle in. Halfway through the feed transition, her previously dull coat was shiny and sleek. She went from a walking skeleton to a healthy girl with well-covered ribs.
Now we have dairy products that have not been contaminated by GMOs and three charming goats to make life interesting.
Read more homesteading news and views at the Barn Hop. 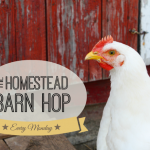