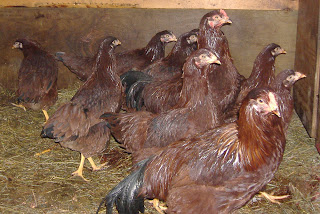 Finally some results on the Buckeyes as meat birds. Due to the cold weather, these birds were not butchered at 16 weeks as we had hoped. We dressed out eight (7 hens, 1 rooster) cull birds at 24 weeks. The birds were skinned and the wings discarded along with the feathers and skin. Here are the weights sans giblets:
(1) 2#
(4) 2 1/2#
(1) 2 3/4#
(1) 3#
(1) 3 3/4#
We did not keep weights on the Australorps we used to raise so don’t know how these birds compare. They are obviously smaller than Cornish X, but we expected that.

Our new resolution is to reduce our meat consumption by using it in casseroles and stews. That means fewer birds to raise and feed. This is especially important to us as we try to find or grow alternatives to soy and corn.

I cooked our first Buckeye into Chicken Pie With Biscuits. In this recipe a 4# bird yields enough broth and meat for two dinners. I used the 3# bird and followed the recipe exactly. The first thing I noticed was the richness of the broth. When I stripped the meat from the bones, the carcass was noticeably smaller and finer boned than our Cornish X birds. The meat had a fuller, more developed flavor and a firmer texture. The three of us pronounced it decidedly better than the Cornish X that we raise. It was more chickeny even with a smaller bird. We still have 3 cups of broth and the other 1/2 of the chicken meat in the freezer for chicken tetrazzini this week. I think we can do as well with one of the 2 1/2# birds by adding a few extra vegetables and maybe replacing some of the milk with cream.

We will only need to raise 52 offspring from these birds to have chicken twice/week. The incubator will be gotten down from the barn rafters and cleaned up next week in anticipation of these young hens beginning their laying career.

I kept 2 roosters and 10 hens from the chicks I ordered in September. A small starter flock of 5 birds was sold. One of the roosters will be put with the 3 White Rock hens to see what kind of meat birds they produce. The other will remain with the Buckeye hens.

At what age do you butcher your birds and what weights do you get?