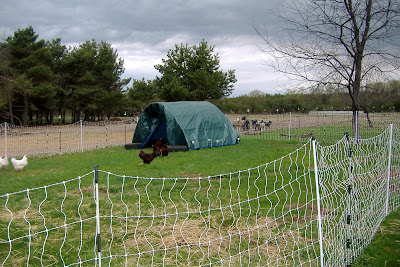 The chickens were in two flocks in two different places and caring for both flocks separately was an inefficient use of time and resources. The Buckeye hens were using the little barn in the backyard for shelter while having the run of the place. A few had adopted the practice of hanging around on the back porch, and we didn’t care for the “decorating” they were doing. The Buckeye rooster was out in the garden with the White Rocks. He is a good rooster and guards his charges well which makes for some unhappy encounters with our dogs.

After reading Andy Lee’s book Chicken Tractor The Permaculture Guide to Happy Hens & Healthy Soil and Day Range Poultry Every Chicken Owner’s Guide to Grazing Gardens and Improving Pastures, we were ready to take action. The plan was to move them to a section of the sheep pasture where they could work their magic on the grass. It was astounding how much improved our lawn was after running meat birds over it one summer. We needed to devise a quick and easy shelter that would be inexpensive and fairly easy to move. It would, of course, involve cattle panels.

The first panel was bent into an arch and rebar was pounded into the ground up against the panel. We used 2 pieces on each side. The next panel was lined up and the process repeated. Using twine we lashed the panels together where they joined. We also tied the panels to the rebar. The wool was used to wrap around all the rough edges that would rub against the tarp. The tops of the rebar were also wrapped. We tied the wool in place with more twine.

It took three of us to put the tarp on because the wind was whipping up a storm. The handy grommets on the tarp allowed us to secure it to the panel structure with yet more hay string. We left the south facing side mostly open so the birds can enter and exit. On the north side, the tarp is pulled all the way down. The extra fabric on the sides and back is weighted down with tires.

Portable, electric poultry netting protects the birds from predators. More on the trials and tribulations of e-net in another post.