Our living supplies arrived from Carolina Supply without incident. The packaging was superb right down to the biodegradable packing peanuts. I can’t say enough good things about this business. 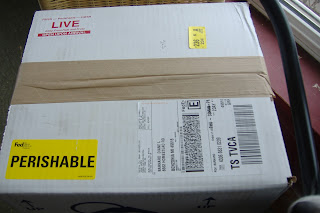 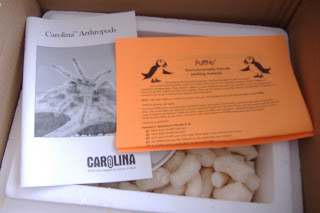 Complete instructions were included to successfully grow both the worms and duckweed. The worms were the first thing unpacked to see how they withstood the journey. They were all alive. 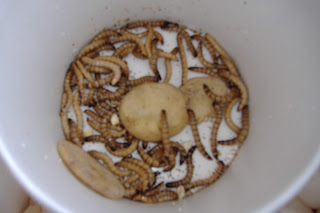 The duckweed looked moist and vibrant. 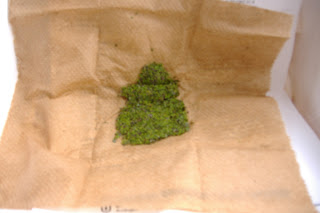 Their habitats had been prepared the day the supplies were ordered. It was very simple to do. About three inches of oatmeal was poured into the bottom of a rather deep container for the super worms. All they need besides the oatmeal is a few pieces of cut up potato or carrot. They get moisture from the vegetables. 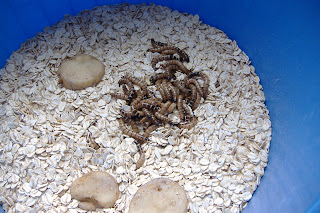 The worms won’t reproduce unless they are in isolation from other worms so the setup had to include a provision for this.  I scrounged around and found a container with compartments to hold the “breeder” worms. People use film canisters and tackle boxes. I’m using an embroidery floss box that has seven compartments. You can probably guess what the tweezers are for. I can’t quite manage to pick them up with my bare hands, yet. 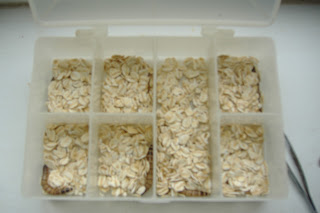 The breeding container was set down into another container and then nestled into the top of the large one. 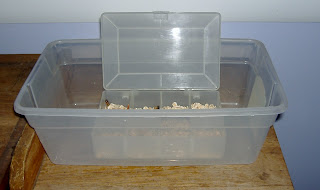 The whole stack was placed into the utility closet. I added a file container between the worms and the boiler mate so the worms wouldn’t get too hot. 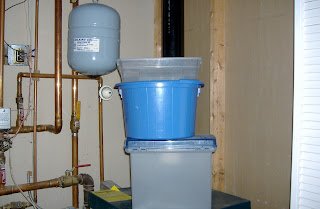 The duckweed was so much smaller than I’d envisioned. I now realize that it is what I always thought was scum on pond surfaces.

I used kitty litter pans that are usually used for planting seeds as water troughs to grow the duckweed on. I put  a small amount of sheep manure in a couple of them and plain water in the third. I think fish emulsion would work really well to provide nutrients for these minuscule plants. 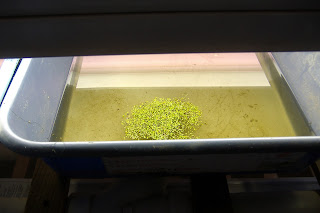 The duckweed was added to the pans and placed under lights on the plant stand.
You can follow our progress in the Super Worm Update Post.