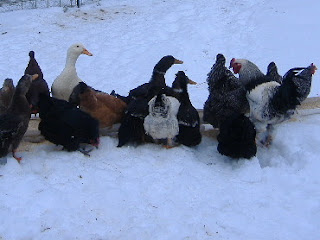 Summer passes by so quickly when there is so much to do. I didn’t realize it had been so long since I’d posted to this blog. I’m sorry I left you all hanging on the whole non GM livestock feed experiment.
Duckweed
Growing these tiny plants did not work out. I started with a small amount that was separated into several containers. Some were placed under fluorescent lights, some had a small amount of sugar or sheep manure added to the water. One container only contained the plants and well water. It seemed that at first the duckweed was growing and multiplying and then the growth stalled and finally died. I’m not sure why. Anyone with ideas please post ’em.
Comfrey
I have this already established in several places and non of my animals have really eaten it much. The goats would eat it about mid afternoon after it had been warmed by the sun. The chickens have never been very interested. I dried some leaves in the dehydrator, crumbled them and mixed them with the chicken’s feed and they relished it.
In order for this to be practical, I need a couple more dehydrators. In a less humid area the leaves could probably be hung to dry. Here they tend to mold. When we have more dehydrators in place, this will be a viable substitute for soy.

Super Worms
This was slow to take off because the worms had to morph to beetles in order to produce more worms. I started with 50 worms on March 21 and presently have 20 beetles left from the original worms. Through trial and error and continued research I learned a lot.
Bedding/Feed
The worms and resulting beetles were originally bedded in raw oatmeal. After the first group of beetles was given a chance to reproduce they were moved to fresh bedding. Occasionally, I looked through the old bedding for signs of hatching worms and never saw any. Further research showed that the beetles reproduced better in fine oats. I ground new bedding up in the blender and put them in that. The newly hatched worms are almost threadlike and show up clearly in the ground oats. The original whole oatmeal bedding eventually did yield some surprisingly big worms. I think it was hard to see the small worms and I just didn’t notice them.
Spoiled Food
One big mistake I made was throwing away the spoiled food. Later I read that the darkling beetles lay their eggs in decaying matter. After that, all dried up food was saved in a clear plastic container. I went through it the other day and collected 50 superworms.
Hiding Place
The beetles like to hide and half a cardboard egg carton serves as the perfect hideout for them. They spend most of their time under that carton. This keeps the baby worms safe that are hatching in the now ground oat bedding. It also means I don’t have to keep moving the beetles to new containers to keep the babies from being eaten. Transferring the beetles is easy. All I have to do is pick up the egg carton since most of the beetles have attached themselves to the inside.

The comfrey and superworms worked out the best. I won’t fool around with the duckweed again unless someone can tell me an easy way to propagate it. More dehydrators are needed so I can go full steam to have enough comfrey to feed 12 birds. I started with 50 super worms on March 21 and still do not have enough worms to even give my chickens a taste 5 1/2 months later. Since the worms should be 6 months old to breed, it will be about the end of October before there are breeder worms. Hopefully by next spring we will have dehydrators in place and containers full of superworms and beetles.

What ideas do you have to replace the GM grains in livestock feed?

When the worms first arrived, seven worms were placed in individual compartments so they would pupate. They must be totally isolated from each other for that process to begin. I gave them each a fresh piece of potato or carrot when I replenished the food for the general population, usually once every couple of days. You can tell when they are beginning to change when they curl themselves into a circle. 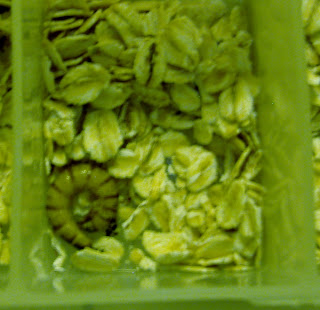 It takes them a few days to do this and they don’t all begin to pupate at the same time. Some of them shed their skins first, like snakes do. Then one day, you look to see an alien-like being has replaced the curled up, dead-looking worm. The cream colored pupa has some distinguishable features like legs, head and body. The pupae are removed to a separate container and another super worm is placed in the cell they vacated. 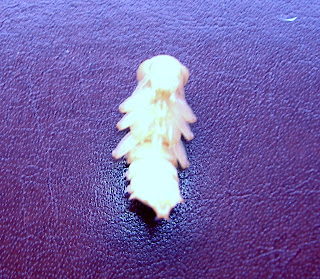 As they mature, the legs and eyes become darker and the beetle it will become is more discernible. The more advanced pupa in the picture below has darker legs. It will become a beetle in the next couple of days. It will be moved to yet another container so when it morphs it won’t feed on the less mature pupae. 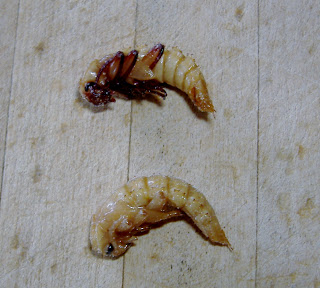 The super worms arrived on 3/3/11 and we had our first Darkling Beetle on 4/3. It is about 1″ long which is longer than I expected it would be. There are a couple more pupae that look like they are ready to begin life as beetles very soon. 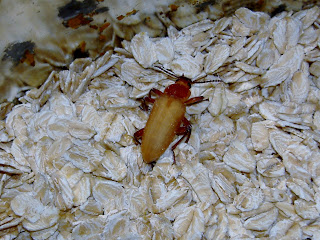 According the the booklet from Carolina Supply, Darkling beetles can live 3 months to one year. This is good news. You can keep a small breeding population of beetles and not be a slave to monitoring pupae. The beetles are moved to a fresh container every week to prevent them from feeding on the eggs they’ve laid in the bedding.