As expected, the baby chicks outgrew their quarters and required an add-on to their chicken pen. I took their pen apart and stored the brooder lights which were no longer needed. There was nowhere to put the chickens so they were  allowed to run free and investigate the garage. These Buckeye chickens are most curious and quickly made the most of their freedom by inspecting and tasting every new object.
I hooked a second puppy pen to the first and formed a long, narrow pen near the back of the garage. This allowed enough room to pull both cars into the garage. Now that the chickens are fully feathered, I could dispense with the rubber mat that was protecting them from the cold concrete. Roosts made of small diameter PVC pipe were duct taped into position at one end of the chicken coop. I think I need to slip some lengths of rebar into these roosts to keep them from sagging.
The longer space accommodated the long feeder that we used when raising Cornish X birds. This feeder is nothing more than a length of PVC gutter with caps on both ends. It is lightweight and easy to clean. When not in use, it is easy to store in the rafters of the hay barn. A new style (at least to me) poultry fountain was provided. This new reservoir will be the subject of a review in a future blog post.
Shredded paper was added for litter, the new feeder and fountain were filled, and it was now time to get the birds into their new home. Time to call the dog in for help with this chore. I planned on this event being the most time consuming task of the day. It can take a remarkably long time to herd, capture and carry 26 birds to a new pen. Who knew that Buckeyes are easy to herd? Well, compared to most other breeds of chickens, that is, not compared to ducks, sheep or cattle. Because this is a bold, friendly breed, they are also easier to catch than shy, nervous chickens. Shane nudged birds towards the pen door and went around the far side of the pen to flush them out. I caught any that missed the pen door. The birds were settled in no time without all the squawking, flapping and rushing around that is usually the hallmark of this chore.
I would like to thank Red Green for teaching me that I can make most anything with a pile of junk, some (a lot) of duct tape and hay twine. This  portable chicken coop should provide enough space until the birds are 16 weeks old. They will then be evaluated and the flock reduced to about six hens and one rooster. The rest are destined for the freezer. 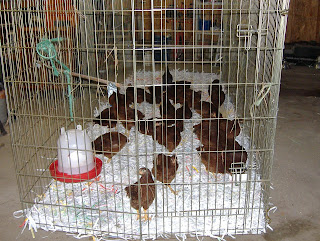